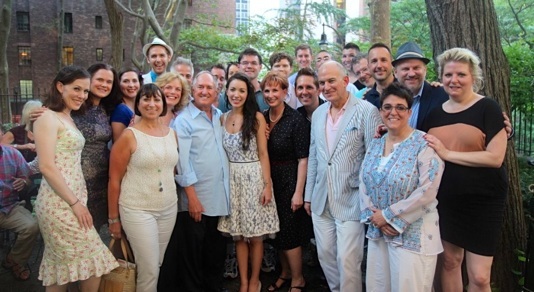 Marquee Five was honored to perform three of Neil Sedaka’s hits at an August 2nd tribute concert that included the singer/songwriting legend, himself. View video of the event here.

“It’s always a hold your breath kinda happening — what if it rains? And it did, so the Bistro and MAC Award Winning series, produced and created by Raissa Katona-Bennett, thankfully occurred on the rain date, Wed. August 2nd.

The hot, steamy evening was a Tribute to songwriting legend Neil Sedaka who made a special guest appearance and is also one of the several judges in the on-going songwriter’s contest.

The Tudor City Greens, in a beautiful park setting near the river off 2nd Avenue and East 42nd Street, was filled and over-flowing with cabaret buffs and music aficionados as some of cabaret’s best talents performed. All performers sang a tune written by the master himself, Neil Sedaka.

Neil Sedaka with Holland Grossman
Hostess extraordinaire Raissa Katona-Bennett sang “Love Will Keep Us Together” and definitive Sedaka interpreter Jim Van Slyke sang “Laughter in the Rain” and then “Brighton,” accompanying himself singing with Terese Genecco, she on drums. Sean Harkness, on guitar, sang “Bad Blood.” Mr. Sedaka’s niece, Holland Grossman, following in the family footsteps will soon be appearing on Broadway in “Rebecca” and sang a duet with her Uncle Neil (who played keyboard) “Should Have Never Let You Go.”

Semi-finalist songwriter Will Reynolds gave an indication of his top notch writing abilities with “If The World Looked Like You” together with his accompanist on violin, Nicholas Perry.

Accompanists during the evening included Kenneth Gartman, David Caldwell, Ian Herman and Bill Zeffiro on piano, subbing in on bass Jordan Jancz and the incomparable Terese Genecco on drums and vocals.

Needless to say, the highlight of the evening was Neil Sedaka who graciously gave of his time and talents sitting at the keyboard playing and singing some of his hits including: “Breaking Up is Hard to Do” and “The Hungry Years.” Sedaka wrote over 1000 songs in his career, is still going strong doing concerts worldwide and is about to receive one of the greatest tributes — a musical about his life opening in London, “Laughter in the Rain,” surely making its way to Broadway.

Congratulations to Raissa Katona Bennett and her band of merry makers, including the folks at Tudor City Greens who work hard to make these concert evenings a reality. The Concerts are free and rely upon donations. www.TudorCityGreens.org The next Concert dates are September 12th and October 3rd.”